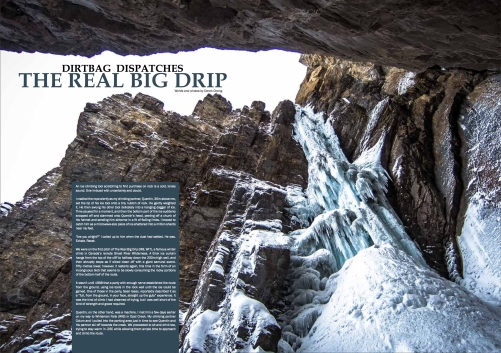 Words and photos by Derek Cheng

An ice climbing tool scratching to find purchase on rock is a cold, lonely sound. One imbued with uncertainty and doubt.

I cradled the rope alertly as my climbing partner, Quentin, 30m above me, set the tip of his ice tool onto a tiny nubbin of rock. He gently weighted it. He then swung his other tool delicately into a hanging dagger of ice. Time paused for a moment, and then the bottom part of the ice suddenly snapped off and slammed onto Quentin’s head, peeling off a chunk of his helmet and sending him airborne in a fit of flailing limbs. I braced to catch him as a microwave-size piece of ice shattered into a million shards near my feet.

“Are you alright?” I called up to him when the dust had settled. He was. Exhale. Reset.

We were on the first pitch of The Real Big Drip (M8, WI7), a famous winter climb in Canada’s remote Ghost River Wilderness. A thick ice curtain hangs from the top of the cliff to halfway down the 200m-high wall, and then abruptly stops as if sliced clean off with a giant samurai sword. Fifty metres lower, however, it restarts again, this time in the form of an incongruous blob that seems to be slowly consuming the rocky portions of the bottom half of the route.

It wasn’t until 1998 that a party with enough nerve established the route from the ground, using ice tools in the rock wall until the ice could be gained. One of those in the party, Sean Isaac, reportedly described it as a “full, from the ground, in your face, straight up the guts” experience. It was the kind of climb I had dreamed of trying, but I was well short of the kind of strength and grace required.

Quentin, on the other hand, was a machine. I met him a few days earlier on my way to Whiteman Falls (WI6) in Opal Creek. My climbing partner Colum and I pulled into the parking area just in time to see Quentin and his  partner ski off towards the creek. We proceeded to sit and drink tea, trying to stay warm in -25C while allowing them ample time to approach and climb the route.

When we eventually arrived at the base of the climb, Quentin was on the spectacular second pitch. I snapped a number of photos and we exchanged details as they skied out and we headed up. The steep, 3D nature of Whiteman Falls makes it one of the great ice climbs in Canada, forcing the lead climber to negotiate ice chimneys and steep, vertical ice to breach the top.

It was Colum’s first ice season, and I was mentoring him in an activity that usually imbues in you the kind of no-fall terror that can take years to get used to, if at all. It is considered at the crazier end of the spectrum of climbing disciplines. Ice guru Will Gadd says that you should top-rope (where safety anchors are set at the top of a climb to minimize the danger of a fall) at least 50 pitches of steep ice before thinking about leading (where a climber places ice screws for protection as they climb, and falls are real and often consequential).

My own ice climbing began under the tutelage of a gangly Brit named Frazer, who smoked incessantly and had never heard of Gadd’s rules. He encouraged me to lead the third pitch of a steep ice climb on my first day, having never placed an ice screw. It was like being thrown into the deep end, if the deep end was a freezing nightmare where you didn’t know what you were doing, and falling probably meant breaking a limb.

I had tried to ease Colum into the sport a little more gently, leading him up a number of pitches before putting him on the sharp end. As a strong rock climber, he didn’t struggle with the physical challenges of steep ice, and Whiteman Falls seemed a perfect way to consolidate his season. He lead the first pitch with only mild prayers to the ice gods to keep him safe and calm, and then followed the steeper, second pitch without a mishap.

Ice is one matter, but climbing steep rock in crampons and ice tools is an altogether different challenge, especially the kind of overhanging rock that guards the first section of The Real Big Drip. So when Quentin asked me to climb it with him, I was as stoked as much as I was nervous.

Success on the climb relies on the ice hanging low enough to be reached before the thin features on the rock wall disappear completely. It had been a warm week and the ice looked in doubt as we hiked up to the climb, but Quentin quickly latched on his crampons and started the first pitch.

The ice was indeed higher than normal, and he committed to moving up virgin rock to reach the precious ice. But as he set one tool in the ice, the little divot of rock that held his other tool disintegrated, throwing his body under the ice flow as the bottom part snapped off under the sudden, extra weight. The broken ice impacted his head and took off a chunk of his helmet, before plummeting into the ground near where I was belaying.

Quentin shrugged it off. Checked his head. Checked his helmet. He seemed to be unscathed, but his helmet was missing a sizeable section above his left ear. The chances of getting side-swiped again in the exact same section seemed very low, he reasoned. So, again, he swung delicately into the dangling ice. Once set, he transferred his weight and pulled higher until he could set his feet into the tenuous-looking ice. It was with relief and joy that the ice didn’t obliterate. He climbed higher to where the ice was thick enough to accept ice screws, and set an anchor to bring me up.

I didn’t realise how overhanging the pitch was until I was on it, and my forearms quickly succumbed to the dreaded climber’s pump. Towards the top of the rock section, as the features thinned, I skated off the rock and into mid-air. I composed myself, pulled myself back onto the wall, and tried again. This time I found enough purchase to swing my ice tool into what was left of the hanging ice pillar. Gently does it. I sucked in my very being and held it tight, as I pulled up and stabbed my crampons into the ice. What a wild move, in an even wilder position!

The second pitch weaves a path up 3D ice pillars and giant ice mushrooms to a roomy ledge at the base of another rock pitch. As I followed the pitch, I was again overcome by an acute sensation of extreme awesomeness – it was the steepest and most featured pitch of ice I had ever been on.

The top of pitch three saw Quentin wriggle through a vertical ice tunnel to get to a decent stance. He set up an anchor and then told me to stand clear for some housekeeping.

I took cover as he started hacking away at the more hollow, broken sections of ice. After a few minutes, the woosh of what sounded like swooping jet planes shattered the serenity of the valley, as blocks of ice the size of small tables rained down on the ledge I was taking refuge on. The impact let loose a thunderous roar and shook the ledge with an unsettling violence. All I could do was turn my head, shield my face and pray that the ledge didn’t give way, as explosion after explosion unleashed.

When the clamour subsided, I opened my eyes to see that the ledge was still there. As I started climbing, the pump demons filled my forearms once again, but I managed to reach Quentin’s stance in the ice and prepared myself to lead the ice curtain. Nothing focuses your mind more sharply than stepping out over a 100m void of nothing beneath your feet, attached only to frozen water via serrated blades extending from your arms and toes. It was gloriously exposed, the kind that stirs butterflies in your stomach into such a frenzy that you’re not sure if you’re in the grip of terror or excitement – or both.

Something resembling confidence started to emerge as I moved higher. Perfect, life-affirming ice. I moved up the vertical ice wall to a break where the angle eased off. I set an anchor, and brought up Quentin, who briskly lead us to the top of the wall, from where we could survey the whole snow-swept valley. 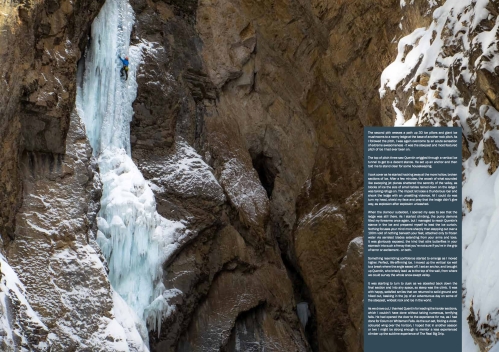 It was starting to turn to dusk as we abseiled back down the final section and into airy space, so steep was the climb. It was with happy, satisfied smiles that we returned to solid ground and hiked out, basking in the joy of an adventurous day on some of the steepest, wildest rock and ice in the world.

As we drove out, I thanked Quentin for leading the harder sections, which I couldn’t have done without taking numerous, terrifying falls. He had opened the door to the experience for me, as I had done for Colum on Whiteman Falls. As the sun set, folding a violet-coloured wing over the horizon, I hoped that in another season or two I might be strong enough to mentor a less experienced climber up the sublime experience of The Real Big Drip.

Derek Cheng is a journalist and photographer whose work has appeared in publications in several countries, including the US, New Zealand, Australia, Canada, and the UK. Since he discovered climbing about ten years ago, he has worked as little as possible so he can travel widely, chasing rock faces in all corners of the world - from stalactite-blessed limestone in China, to the alpine granite of the Bugaboos and the Sierra Nevada, to quartzite giants in Morocco. His work can be viewed at dirtbagdispatches.com
View all posts by Derek Cheng →
This entry was posted in adventure, canadian rockies, climbing, dirtbag dispatches, ice climbing, new zealand adventure magazine, Uncategorized and tagged adventure, climbing, ghost river wilderness area, ice climbing, mixed climbing, the real big drip, travel. Bookmark the permalink.
Loading Comments...