Chasing The High: Addicted to Crack

Published in The Climber, October 2018

Words and photos by Derek Cheng 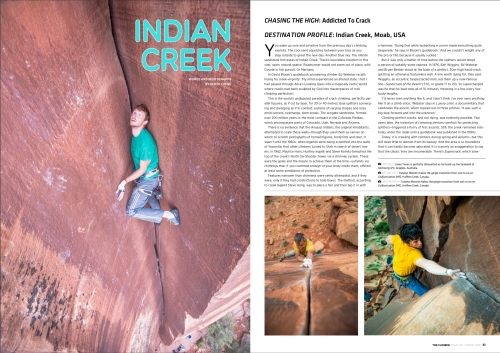 You wake up sore and sensitive from the previous day’s climbing exploits. The cool sand squelches between your toes as you step outside to greet the new day. Another blue sky. The infinite sandstone fortresses of Indian Creek. There’s boundless freedom in this vast, open, natural space. Roadrunner would not seem out of place, with Coyote in hot pursuit. Or Martians.

In David Bloom’s guidebook, pioneering climber Ed Webster recalls losing his creek-virginity: “My mind experienced an altered state; I felt I had passed through Alice’s Looking Glass into a magically exotic world where cracks had been sculpted by God into masterpieces of rock climbing perfection.”

This is the world’s undisputed paradise of crack climbing; perfectly parallel fissures, as if cut by laser, for 30 or 40 metres; dual splitters converging and diverging as if in combat; systems of varying shapes and sizes amid corners, overhangs, stem-boxes. The wingate sandstone, formed over 200 million years, is the most compact in the Colorado Plateau, which encompasses parts of Colorado, Utah, Nevada and Arizona.

There is no evidence that the Anasazi Indians, the original inhabitants, attempted to scale these walls—though they used them as canvas on which to scratch petroglyphs of horned figures, footprints and deer. It wasn’t until the 1960s, when legends were being scratched into the walls of Yosemite, that other climbers turned to Utah in search of desert towers. In 1962, Maurice Horn, Huntley Ingalls and Steve Komito breached the top of the creek’s North Six-Shooter Tower via a chimney system. These were the goals and the means to achieve them at the time—summits via chimneys that, if you crammed enough of your body inside them, offered at least some semblance of protection.

Features narrower than chimneys were rarely attempted, and if they were, only if they had constrictions to hold hexes. The method, according to creek legend Steve Hong, was to place a hex and then tap it in with a hammer. “Doing that while laybacking a corner made everything quite desperate,” he says in Bloom’s guidebook. “And we couldn’t weight any of the pro or fall, because it usually sucked.”

But it was only a matter of time before the splitters would tempt a person of suitably-sized cajones. In 1976, Earl Wiggins, Ed Webster and Bryan Becker stood at the base of a perfect, 30m-high hand-crack splitting an otherwise featureless wall. A line worth dying for, they said. Wiggins, an eccentric bespectacled man, led them up a now-famous line—Supercrack of the Desert (5.10, or grade 17 to 20). So supercharged was he that his lead took all of 10 minutes, throwing in a hex every few body-lengths.

Climbing perfect cracks, and not dying, was evidently possible. Two years later, the invention of camming devices—perfect for protecting splitters—triggered a flurry of first ascents. Still, the creek remained relatively under the radar until a guidebook was published in the 1990s. 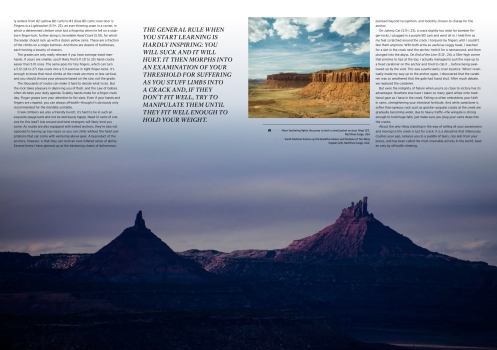 Today, it is crawling with climbers during spring and autumn—but this still does little to detract from its beauty. And the area is so boundless that it can hardly become saturated. It is scarcely an exaggeration to say that the classic lines are innumerable. There’s Supercrack, which slowly widens from #2 (yellow BD cam) to #3 (blue BD cam); next door is Fingers in a Lightsocket (5.11+, 23), an ever-thinning seam in a corner, in which a determined climber once lost a fingertip when he fell on a stubborn finger-lock; further along is Incredible Hand Crack (5.10), for which the leader should rack up with a dozen yellow cams. These are a fraction of the climbs on a single buttress. And there are dozens of buttresses, each hosting a bounty of classics.

The grades are only really relevant if you have average-sized man-hands. If yours are smaller, you’ll likely find 5.11 (21 to 23) hand-cracks easier than 5.10 ones. The same goes for tiny fingers, which can turn a 5.12 (24 to 27) tips-crack into a 5.11 exercise in tight finger-locks. It’s enough to know that most climbs at the creek are more or less vertical, and you should choose your pleasure based on the size, not the grade.

The thousands of routes can make it hard to decide what to do. But the rock takes pleasure in depriving you of flesh, and the Law of Gobies often dictates your daily agenda. Scabby hands make for a finger-crack day. Finger grazes turn your attention to fist sizes. Even if your hands and fingers are crippled, you can always offwidth—though it’s obviously only recommended for the mentally unstable.

Creek climbers are also a friendly bunch; it’s hard to be in such an exquisite playground and not be deliriously happy. Need 12 cams of one size for this lead? Ask around and total strangers will likely lend you some. As routes are also equipped with bolted anchors, they’re also not opposed to leaving up top-ropes so you can climb without the heart palpitations that can come with venturing above gear. A byproduct of the anchors, however, is that they can instil an over-inflated sense of ability when you’re on lead. Several times I have glanced up at the beckoning chains of deliverance, pumped beyond recognition, and foolishly chosen to charge for the anchor.

On Johnny Cat (5.11+, 23), a crack slightly too wide for bomber finger-locks, I plugged in a purple BD cam and went all in. I held firm as my feet scratched around the crack. I torqued my fingers until I couldn’t feel them anymore. With both arms as useful as soggy toast, I reached for a slot in the crack next the anchor, held it for a nanosecond, and then plunged into the abyss. On End of the Line (5.12-, 24), a 55m-high corner that pinches to tips at the top, I actually managed to pull the rope up to a fixed carabiner on the anchor and tried to clip it … before being swallowed up by the void. This was a particularly cruel injustice. When I eventually made my way up to the anchor again, I discovered that the carabiner was so weathered that the gate had fused shut. (After much debate, we replaced the carabiner.)

But even the indignity of failure when you’re so close to victory has its advantages. Nowhere else have I taken so many giant whips onto traditional gear as I have in the creek. Falling so often will embolden your faith in cams, strengthening your intestinal fortitude. And while sandstone is softer than igneous rock such as granite—popular cracks at the creek are gradually becoming wider, due to heavy traffic—the wingate is strong enough to hold huge falls; just make sure you plug your cams deep into the cracks.

About the only thing standing in the way of selling all your possessions and moving to the creek is lust for crack. It is a discipline that infamously crushes your ego, reduces you to a puddle of tears, rips skin from your bones, and has been called the most miserable activity in the world, beaten only by offwidth climbing.

Learning any new skill is usually, at first, a challenge, and crack climbing is so unlike other climbing that it is practically a different sport—unless you’re laybacking, in which case you’re already cheating. Alex Megos, who has onsighted 35, reinforced this when he once gave a talk about a trip to the US, citing a 5.11+ (23) in Indian Creek as the most difficult climb of the trip; he said he almost threw up when he reached the top.

The general rule when you start learning is hardly inspiring: you will suck and it will hurt. It then morphs into an examination of your threshold for suffering as you stuff limbs into a crack and, if they don’t fit well, try to manipulate them until they fit well enough to hold your weight. Stuffing in feet as toes scream for relief. Desperately fattening hand-jams as gravity seems to strengthen and you slowly feel yourself sliding out. Holding your core tight as you force a knee into an offwidth and try, outrageously, to place your hand against your fist and squeeze them together for a hand-fist stack. You’ll likely hate it. You’ll want to ignore the crack and crimp tiny nubbins on the face. Double-gastoning both sides of a crack is a sure sign of a sport climber, as are aggressive, tight shoes (crack shoes are comfortable and flat).

But with practice and patience, the soul-destroying becomes the soul-enriching. Your frantic karate-chops will transform into calmly-placed hand-jams with all the exertion of a meditating gecko. That look of pain will change to joy and exhilaration when you realise that you can actually pull up on a hand-fist stack. Soon you will be floating through the baggy-hands roof sections of King Cat (5.11+, 23) and T-Bones Tonight (5.12-, 24). Or laughing as you ring-lock your way to the horizontal break that leads to salvation on Way Rambo (5.12, 24). Or beaming as you showcase your competence on seams that widen from pinky-locks to hands to fists to elbow-grinding chicken-wings.

And the rewards are more than simply dancing up the prettiest lines in existence. Crack-competence opens up a world of granite alpine routes that usually involve cracks and, as cruel as it sounds, occasional offwidths. It also improves sport climbing; my endurance was so poor while in the notoriously steep Red River Gorge, in Kentucky, that I only ever sent routes that had hand-jams—rests that sport climbers struggle to find, let alone use.

Ultimately, though, The Creek Experience is much more than the climbing. It is also the familiar faces and new friends, large communal dinners, and lazy pancake brunches on rest days. Nightly fires under starry skies. Basking in the glorious quarantine from the rest of the world.

It is taking a moment to inhale the exquisite beauty, and trying to hold it in your chest so that it becomes ingrained in your memory for when you are in a dejected place, and in need of a reminder of life’s wondrous awesomeness.

Conservationists celebrated the environmental protections that came with the establishment of the Bears Ears National Monument – a huge swath of land that included Indian Creek – under Barack Obama. But Donald Trump has rolled this back by 85 per cent to make way for the mining and oil industries to cash in.

Derek Cheng is a journalist and photographer whose work has appeared in publications in several countries, including the US, New Zealand, Australia, Canada, and the UK. Since he discovered climbing about ten years ago, he has worked as little as possible so he can travel widely, chasing rock faces in all corners of the world - from stalactite-blessed limestone in China, to the alpine granite of the Bugaboos and the Sierra Nevada, to quartzite giants in Morocco. His work can be viewed at dirtbagdispatches.com
View all posts by Derek Cheng →
This entry was posted in adventure, Bears Ears National Monument, climbing, crack climbing, dirtbag dispatches, Indian Creek, new zealand adventure magazine, rock climbing, trad climbing and tagged Bears Ears National Monument, climbing, crack climbing, Indian Creek, moab, rock climbing, trad climbing. Bookmark the permalink.
Loading Comments...