The Dirtbag Diaries – the beach climbing paradise of Tonsai 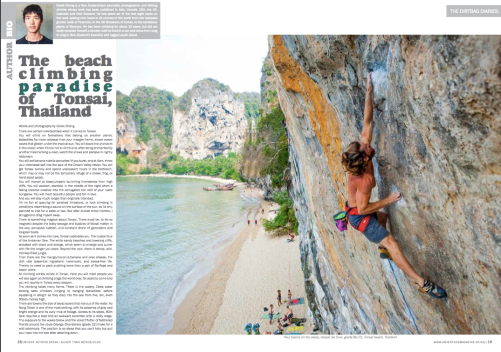 There are certain inevitabilities when it comes to Tonsai.

You will climb on formations that belong on another planet, stalactites far more colossal than your meagre frame, above ocean waves that glisten under the tropical sun. You will slack line and swim in the ocean when it’s too hot to climb and, after being enchanted by another mesmerizing sunset, watch fire shows and partake in nightly hedonism.

You will eat banana-nutella pancakes ’til you burst, and at 4am, throw your inebriated self into the pool of the Dream Valley resort. You will get Tonsai tummy and spend unpleasant hours in the bathroom, which may or may not be the temporary refuge of a snake, frog, or hand-sized spider.

You will marvel at base-jumpers launching themselves from high cliffs. You will awaken, startled, in the middle of the night when a falling coconut crashes into the corrugated iron roof of your rustic bungalow. You will meet beautiful people and fall in love.

And you will stay much longer than originally intended.

I’m no fan of queuing for polished limestone, or rock climbing in conditions resembling a sauna on the surface of the sun, so I’d only planned to visit for a week or two. But after almost three months, I struggled to drag myself away.

There is something magical about Tonsai. There must be, to be so magnetic despite the leaky sewage and bubbles of fecal matter in the sea, pervasive rubbish, and constant drone of generators and long-tail boats.

As soon as it comes into view, Tonsai captivates you. The crystal blue of the Andaman Sea. The white sandy beaches and towering cliffs, streaked with black and orange, which seem to enlarge and quiver with life the longer you stare. Beyond the rock, there is dense, wild, monkey-filled jungle.

Then there are the mango/coconut/banana and oreo shakes, the chill vibe (essential ingredient: hammock), and stress-free life. There’s no need to pack anything more than a pair of flip-flops and beach attire.

All climbing worlds collide in Tonsai. Here you will meet people you will see again at climbing crags the world over, for years to come, and you will reunite in Tonsai every season.

The climbing takes many forms. There is the watery. Deep water soloing sees climbers clinging to hanging stalactites, before squealing in delight as they drop in to the sea from five, ten, even fifteen metres high.

There are towers the size of skyscrapers that rise out of the water. Ao Nang Tower is one of the most striking, with its splashes of gray and bright orange, and its curly mop of foliage. Access to its steep, 80m face requires a boat, and an awkward scramble onto a rocky ledge. The exposure to the waves below and the violent flutter of feathered friends around the route Orange Chandeliers (grade 22) make for a wild adventure. The position is so steep that you can’t help but pull your rope into the sea after abseiling down.

There are an abundance of routes with other-worldly features, such as Beauty and the Beast (grade 22), where you have to fall away from the cliff face and onto a giant, drooping bulb of rock. If you’re short, the fall becomes a terrifying leap.

A similar maneuver awaits you on the third pitch of Humanality (21), where a massive stalactite magically appears behind you when the holds on the vertical face run out. Spin and reach behind, pull onto this amazing feature, climb up a few metres, and then ease back onto the face – all while shaking your head in disbelief.

The famous climbs on the beach – is there a beach in the world with as high a proportion of six-packs? – include roof climbs such as Tantrum (29) or Tonsai Playboy (24). The former includes a rail where the climber hangs and traverses from only fingertips. Footwork is redundant. The latter strikes a line through the longest part of the roof, and was particularly memorable after I took a fall with the rope behind my leg. I duly inverted into a harmless upside-down dangle in open air. Before the fall, I was heard to say, very clearly, “Oh shit,” just before my belayer let out a scream for melodramatic effect.

Something sinister awaits climbers on Heart of Darkness (23). The rock confronts you with a section that demands some creative body weaving through overhanging, intertwining tufas. Vertical caving, 70m above the jungle.

Yet the most alluring multi-pitch is Lord of the Thais (25), which has one of the most glorious sections of rock, anywhere in the world – a roof traverse on perfectly hand-sized limestone blobs. You climb across, your body completely horizontal, clinging to these amazing features – high above the infinite blue of the ocean and a panoramic view of the peninsula. Such sublime settings leave you speechless.

Like all famous climbing destinations, the characters are eccentric, entertaining, and endless value. There is Jonas, the most handsome man in Tonsai, a Nordic viking with bulges in all the most suitable places. Steve, who paces the beach with his headphones and barometer as he prepares for yet another attempt on Tonsai’s hardest climb, Greed (33). Abs-Justin, whose eight-pack is unrivaled, and whose ability to do single finger pull-ups is inversely related to his ability to climb technical routes requiring good footwork.

One evening, when it was suggested to someone that they climb like Justin and just pull hard with their arms and neglect footwork, he retorted: “That is NOT TRUE! I’ve worn through shoes before!”

But Tonsai is evolving to the relentless march of development. A decade ago, only a handful of thatch bungalows in the jungle offered accommodation. Those bungalows are still there (though five times the price), but so is Dream Valley, a plush resort-style hotel with a swimming pool area. Climbers still roam the beach, though these days, backpackers are equally abundant.

In 2014 the Bangkok-based consortium MBK that owns the beach property ended the leases for the bars on its site. Workers erected an ominous two metre-high wall around the beach property, as baseless rumours permeated about plans for a luxury resort that wouldn’t gel with Tonsai’s image. There was a lot of talk about The End of Tonsai.

But the leaders of Tonsai Business Group say a resort on the beach – which would appeal to a clientele of rich families and honeymooners – is extremely unlikely. It would be prohibitively expensive to ship in all the building materials, and would also have to comply with local building restrictions, including no development 20m from the high-tide mark, and nothing taller than six metres within 50m of high tide.

“They plan to do bungalows, because they already know they cannot make a big resort,” says Julamanee Subhate, owner of Jungle Hut Bungalows.

“They don’t own the rock, and they don’t own the beach,” says Elke Schmitz, owner of Tonsai Basecamp. “Whatever is going to happen on that land cannot affect what Tonsai is famous for: world-class climbing and an incredible, open and international community.”

Ongoing consultations with MBK make local business owners hopeful that the vibe of Tonsai will not change. As of mid-2015, the bars are still around – albeit in the jungle – as are the fire-shows, mushroom shakes, and endless cliffs of rock. A new sector called Gibbon’s roof was discovered in March 2014, sporting routes that stretch more than 12m across a wild, horizontal roof. The atmosphere is still relaxed and groovy, and the beach and sea are cleaner without the bars by the water.

Perhaps the key to getting sucked into Tonsai life is sleep deprivation. You are constantly in a state of euphoric sedation. Your mind does this lazy calculation of how much effort it would take to pack and leave, versus how easy and fun it is to stay. You might head to one of the outer islands. The deserted sandy paradise of Koh Lao Liang, or the peace and quiet of Koh Yao Noi. Or north to the less humid crags of Chiang Mai.

But you’ll always come back to Tonsai. Everybody does.

Derek Cheng is a journalist and photographer whose work has appeared in publications in several countries, including the US, New Zealand, Australia, Canada, and the UK. Since he discovered climbing about ten years ago, he has worked as little as possible so he can travel widely, chasing rock faces in all corners of the world - from stalactite-blessed limestone in China, to the alpine granite of the Bugaboos and the Sierra Nevada, to quartzite giants in Morocco. His work can be viewed at dirtbagdispatches.com
View all posts by Derek Cheng →
This entry was posted in adventure, climbing, dirtbag dispatches, Travel writing and tagged beach climbing, climbing, climbing in thailand, dirtbag dispatches, rockclimbing, tonsai. Bookmark the permalink.
Loading Comments...