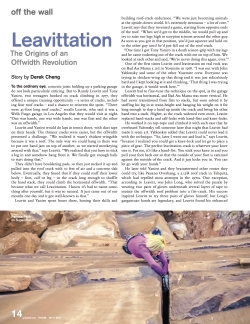 To the ordinary eye, or even the ordinary climber’s eye, concrete joists holding up a parking garage do not look particularly enticing. But to Randy Leavitt and Tony Yaniro, two teenagers hooked on crack climbing in 1977, they offered a unique training opportunity – a series of cracks, including four roof cracks – and to reinvent crack climbing in the process.

“There were 45-foot long roof cracks,” recalls Leavitt, who said it was a Wells Fargo garage in Los Angeles that anyone could access. “One was hands, the other was wide hands, one was fists, and the other one was offwidth.”

Leavitt and Yaniro would do laps on these cracks, using duct tape on their hands and tennis shoes on their feet. The thinner three of the four cracks were easily climbable, but the offwidth presented a challenge.

“We realized it wasn’t a chicken-wingable in the normal sense, and it was a roof. The only way we could actually hang in there was to put one hand jam on top of another, so we started monkeying around with this.

“We realized you can reach up and pull yourself off the ground with these double hand jams, and we realized that you’re gonna have to stick a leg in there and somehow hang from it. And we finally got enough balls to start doing that.”

They didn’t have bouldering pads, so they just sucked it up and pulled into the roof crack with 10 feet of air and an unforgiving concrete slab below them.

Eventually they found that if they could stuff their lower body – foot, calf, or leg – in the crack long enough to shuffle the hand stack, they could climb the horizontal offwidth. Every hand-stack today that is stuffed inside a wide crack has its origins in those days of thrashing in the garage.

“And that became what we call ‘leavittation’. I know it’s bad to name something after yourself, but it was so natural. It just came out of our mouths one day, and it got well known as that.

“We were just becoming animals at this weird, upside-down world. It’s extremely strenuous. The workouts we used to do developed a lot of core – leg lifts or front levers, that kind of stuff. That really made a big difference on how well you could execute those moves.”

Leavitt and Yaniro spent endless hours in the garage, usually at night when it was relatively empty, honing their skills and building roof-crack endurance. They invented a contest, starting from opposite ends of the roof.

“When we’d get to the middle, we would pull up and try to raise our legs high in scorpion scissors around the other guy. As soon as you got in that position, you’d just squeeze and hold on to the other guy until he’d just fall out of the roof crack.”

These battles, however, had a high degree of potential hazard, and did not last long.

“One time I got Tony Yaniro in a death scissor-grip with my legs, and he came rocketing out of the crack with me on top of him, and we just looked at each other and said, ‘we’re never doing this again, ever’.” 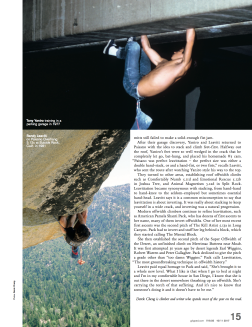 Leavitt says one of the first times he used leavittation on real rock was on Bad Ass Mama (5.11d) in Yosemite in 1978.

“I was out with John Yablonsky and some of the other Yosemite crew. Everyone was trying to chicken-wing up that thing and it was just ridiculously hard, and I kept looking at it and thinking, ‘That thing I was trying in the garage, that would work here’.”

The climb starts with fists, but soon widens. Leavitt had to fine-tune the technique on the spot, as the garage offwidth was horizontal, and Bad Ass Mama was more vertical. He had also never had to transition from fists to stacks, but soon solved this by stuffing his leg in at waist-height, and then hanging his weight on it for long enough to slap a hand up inside the crack and bring his other hand into a stack. Higher, the crack widened even more, and Leavitt replaced hand-stacks and calf-locks with hand-fists and knee-locks.

He worked it on top-rope and climbed it with such ease that he overheard Yabonsky tell someone later that night that Leavitt had made it look like 5.8. But Yablonksy added that Leavitt could never lead it with his new technique.

“So later I went out and lead it,” says Leavitt, “because I realized you could get a knee-lock in and let go with both hands, place a piece of gear, clip the rope in, and keep moving.

“The perfect leavittation crack is basically whatever your knee size is. For me, it’s like a hand-fist. You stick your knee in as deep as you can and you pull your foot back out so that the outside of your foot is cammed against the outside of the crack. And it just locks you in. You can let go with your hands.”

He later regaled his success no Bad Ass Mama to Yaniro, and they brainstormed other routes they could try to test their technique. Paisano Overhang, a 5.12R roof crack in Tahquitz, was a prized roof crack that had repelled most attempts in the 1970s.

One exception, according to Leavitt, was John Long, who solved the puzzle by wearing two pairs of gloves underneath several layers of tape to mutate the offwidth roof problem into a fist-crack. His success inspired Leavitt to try three pairs of gloves himself, but Long’s gargantuan hands are legendary, and Leavitt found his mitts still failed to make a solid-enough fist jam, even with several layers.

After their garage discovery, however, Yaniro and Leavitt returned to Paisano with the idea to stack and climb feet-first. Halfway out the roof, Yaniro’s feet were so well wedged in the crack that he completely let go, bat-hung, and placed his homemade #5 cam.

“Paisano was perfect leavittation – the perfect size was either a double hand-stack, or and a hand-fist, or two fists,” recalls Leavitt, who sent the route after watching Yaniro style his way to the top.

They turned to other areas, establishing roof offwidth climbs such as Comfortably Numb (5.11d) and Emotional Rescue (5.12b), in Joshua Tree, and Animal Magnetism (5.12d) in Split Rock in Colorado. Leavittation became synonymous with stacking, from hand-hand to hand-knee to the seldom-employed hand-head, and eventually became the stepping stone to more wild inversions.

However, Leavitt says it is a common misconception to say that leavittation is about inverting. It was really about stacking to keep yourself in a wide crack, and inverting was a natural progression that came from climbing a crack that widened beyond your stack.

“As it gets wider, at some point, none of your body parts will hold you in there as you move your hands up. Every time you see it you know its probably going to be an invert, so you know you have to throw your leg above you.

“With the invert, all your body weight is on your feet, and you do a sit up into an arm bar, and then you use your feet as a pivot point and keep bringing your body up and up and up until its finally over your feet.”

These days many strong offwidth climbers continue to refine leavittation, among them American offwidth queen Pamela Shanti Pack, who has dozens of first ascents to her name, many of them invert offwidths.

One of her most recent FAs, at the end of May, was the second pitch of the Super Offwidth of the Desert, an unfinished desert project on Merrimac Buttress, near Moab, Utah, that was first attempted 30 years ago by desert legends Earl Wiggins, Robert Warren and Peter Gallagher. So severe were the challenges of the route that they had to aid the first pitch to complete it, and they barely attempted the second pitch.

The first six metres of the second pitch are an awkward, overhanging, leaning offwidth that forced Pack into a leg stuff, tenuous arm bar and slopey gaston. Higher up is a series of steep stacks and calf locks, with a ‘martini glass’ problem guarding the chain that forced her into opposing double chicken wings.

After sending the pitch, Pack declined to give the pitch a grade other than “too damn Wiggins”; Ryan Krum, who did the first ascent of the offwidth on pitch one a few days before Pack sent the second pitch, graded the first pitch “pretty damn Wiggins”.

Pack calls leavitation “the most ground-breaking technique in offwidth history”.

Leavitt paid equal homage to Pack: “Pamela’s brought it to a whole new level. We used to say (of a widening crack where inverting was necessary), ‘That’s not a good levitation size, the crack is defective,’ but I think she’s looking at that and saying, ‘That’s what I’m looking for’.

“What I like is that when I go to bed at night and I’m in my comfortable house in San Diego, that I know that out there in the desert somewhere is Pamela Shanti Pack, thrashing up an offwidth, and she’s carrying the torch of that suffering.

“And it’s nice to know that someone’s doing it, and it doesn’t have to be me.”

Derek Cheng is a journalist and photographer whose work has appeared in publications in several countries, including the US, New Zealand, Australia, Canada, and the UK. Since he discovered climbing about ten years ago, he has worked as little as possible so he can travel widely, chasing rock faces in all corners of the world - from stalactite-blessed limestone in China, to the alpine granite of the Bugaboos and the Sierra Nevada, to quartzite giants in Morocco. His work can be viewed at dirtbagdispatches.com
View all posts by Derek Cheng →
This entry was posted in Uncategorized. Bookmark the permalink.
Loading Comments...
Comment
×