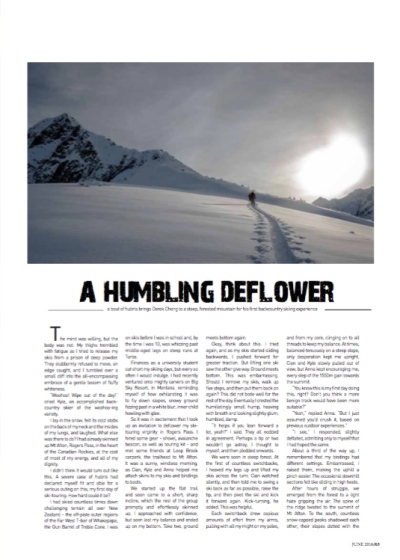 The mind was willing, but the body was not. My thighs trembled with fatigue as I tried to release my skis from a prison of deep powder. They stubbornly refused to move, an edge caught, and I tumbled over a small cliff into the all-encompassing embrace of a gentle bosom of fluffy whiteness.

“Woohoo! Wipe out of the day!” cried Kyle, an accomplished back-country skier of the woohoo-ing variety.

I lay in the snow, felt its cold stabs on the back of my neck and the insides of my lungs, and laughed. What else was there to do? I had already skinned up Mt Afton, Rogers Pass, in the heart of the Canadian Rockies, at the cost of most of my energy, and all of my dignity.

I didn’t think it would turn out like this. A severe case of hubris had declared myself fit and able for a serious outing on this, my first day of ski-touring. How hard could it be?

I had skied countless times down challenging terrain all over New Zealand – the off-piste outer regions of the Far West T-bar of Whakapapa, the Gun Barrel of Treble Cone. I was on skis before I was in school and, by the time I was 10, was whizzing past middle-aged legs on steep runs at Turoa.

Finances as a university student cut short my skiing days, but every so often I would indulge. I had recently ventured onto mighty carvers on Big Sky Resort, in Montana, reminding myself of how exhilarating it was to fly down slopes, snowy ground fizzing past in a white blur, inner child howling with glee.

So it was in excitement that I took up an invitation to deflower my ski-touring virginity in Rogers Pass. I hired some gear – shovel, avalanche beacon, as well as touring kit – and met some friends at Loop Brook carpark, the trailhead to Mt Afton. It was a sunny, windless morning, as Cian, Kyle and Anna helped me attach skins to my skis and bindings to boots.

We started up the flat trail and soon came to a short, sharp incline, which the rest of the group promptly and effortlessly skinned up. I approached with confidence, but soon lost my balance and ended up on my bottom. Take two, ground meets bottom again.

Okay, think about this. I tried again, and as my skis started sliding backwards, I pushed forward for greater traction. But lifting one ski saw the other give way. Ground meets bottom. This was embarrassing. Should I remove my skis, walk up five steps, and then put them back on again? This did not bode well for the rest of the day. Eventually I crested the humiliatingly small hump, heaving with breath and looking slightly glum, humbled, damp.

“It helps if you lean forward a lot, yeah?” I said. They all nodded in agreement. Perhaps a tip or two wouldn’t go astray, I thought to myself, and then plodded onwards.

We were soon in steep forest. At the first of countless switchbacks, I heaved my legs up and lifted my skis across the turn. Cian watched silently, and then told me to swing a ski back as far as possible, raise the tip, and then pivot the ski and kick it forward again. Kick-turning, he added. This was helpful.

Each switchback drew copious amounts of effort from my arms, pulling with all my might on my poles, and from my core, clinging on to all threads to keep my balance. At times, balanced tenuously on a steep slope, only desperation kept me upright. Cian and Kyle slowly pulled out of view, but Anna kept encouraging me, every step of the 1550m gain towards the summit.

“You know this is my first day doing this, right? Don’t you think a more benign track would have been more suitable?”

“Yeah,” replied Anna. “But I just assumed you’d crush it, based on previous outdoor experiences.”

“I see,” I responded, slightly deflated, admitting only to myself that I had hoped the same. 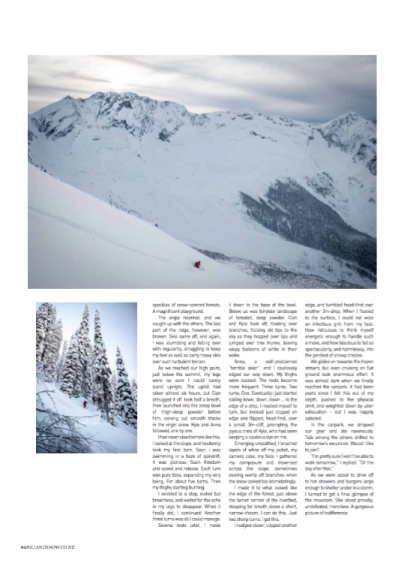 About a third of the way up, I remembered that my bindings had different settings. Embarrassed, I raised them, making the uphill a pinch easier. The occasional downhill sections felt like sliding in high heels.

After hours of struggle, we emerged from the forest to a light haze gripping the air. The spine of the ridge twisted to the summit of Mt Afton. To the south, countless snow-capped peaks shadowed each other, their slopes dotted with the speckles of snow-covered forests. A magnificent playground.

The angle relented, and we caught up with the others. The last part of the ridge, however, was broken. Skis came off, and again, I was stumbling and falling over with regularity, struggling to keep my feet as well as carry heavy skis over such turbulent terrain.

As we reached our high point, just below the summit, my legs were so sore I could barely stand upright. The uphill had taken almost six hours, but Cian shrugged it off, took half a breath, then launched into the steep bowl of thigh-deep powder before him, carving out smooth tracks in the virgin snow. Kyle and Anna followed, one by one.

I had never skied terrain like this. I looked at the slope, and hesitantly took my first turn. Soon I was swimming in a haze of spindrift. It was glorious. Such freedom and speed and release. Each turn was pure bliss, expanding my very being. For about five turns. Then my thighs starting burning.

I skidded to a stop, elated but breathless, and waited for the ache in my legs to disappear. When it finally did, I continued. Another three turns was all I could manage.

Several rests later, I made it down to the base of the bowl. Below us was fairytale landscape of forested, deep powder. Cian and Kyle took off, floating over branches, flicking ski tips to the sky as they hopped over lips and jumped over tree trunks, leaving wispy balloons of white in their wake.

Anna, a self-proclaimed “terrible skier”, and I cautiously edged our way down. My thighs were toasted. The rests became more frequent. Three turns. Two turns. One. Eventually I just started sliding down, down, down … to the edge of a drop. I readied myself to turn, but instead just clipped an edge and flipped, head-first, over a small 3m-cliff, prompting the joyous cries of Kyle, who had been keeping a cautious eye on me.

Emerging unscathed, I brushed layers of white off my jacket, my camera case, my face. I gathered my composure and traversed across the slope, sometimes skating warily off branches when the snow looked too intimidating.

I made it to what looked like the edge of the forest, just above the tamer terrain of the riverbed, stopping for breath above a short, narrow chasm. I can do this. Just two sharp turns. I got this.

I nudged closer, clipped another edge, and tumbled head-first over another 3m-drop. When I floated to the surface, I could not wipe an infectious grin from my face. How ridiculous to think myself energetic enough to handle such a move, and how fabulous to fail so spectacularly, and harmlessly, into the gentlest of snowy cradles.

We glided on towards the frozen stream, but even cruising on flat ground took enormous effort. It was almost dark when we finally reached the carpark. It had been years since I felt this out of my depth, pushed to the physical limit, and weighted down by utter exhaustion – but I was happily satiated.

In the carpark, we stripped our gear and ate ravenously. Talk among the others drifted to tomorrow’s excursion. Would I like to join?

“I’m pretty sure I won’t be able to walk tomorrow,” I replied. “Or the day after that.”

As we were about to drive off to hot showers and burgers large enough to shelter under in a storm, I turned to get a final glimpse of the mountain. She stood proudly, undefeated, merciless. A gorgeous picture of indifference.

Derek Cheng is a journalist and photographer whose work has appeared in publications in several countries, including the US, New Zealand, Australia, Canada, and the UK. Since he discovered climbing about ten years ago, he has worked as little as possible so he can travel widely, chasing rock faces in all corners of the world - from stalactite-blessed limestone in China, to the alpine granite of the Bugaboos and the Sierra Nevada, to quartzite giants in Morocco. His work can be viewed at dirtbagdispatches.com
View all posts by Derek Cheng →
This entry was posted in adventure, dirtbag dispatches, Uncategorized and tagged mt afton, rogers pass, ski touring. Bookmark the permalink.
Loading Comments...